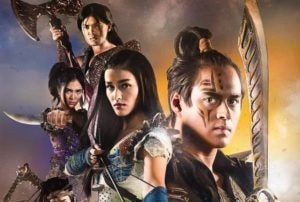 ‘Bagani’ teleserye under fire from CHED commissioner for misuse of term


Commissioner Ronald Adamat of the Commission on Higher Education (CHED) is requesting ABS-CBN for "immediate clarification and explanation" on its use of the term "Bagani" in a TV show of the same name.

Dr. Adamat, a former representative of the Indigenous People Sector during the 10th Congress, addressed a formal letter to Carlo Katigbak, president of ABS-CBN.

"The undersigned... would like to seek immediate clarification and explanation from ABS-CBN as to how and why the term 'Bagani', which is an Indigenous Peoples terminology and endemic only to IPs [Indigenous Peoples], ended up used in a teleserye that I suspect is devoid of real meaning and substance."

Adamat said he spoke both as an IP himself and as a CHED commissioner regarding the issue. He cited that he was "deeply bothered about the portrayal of 'Bagani' in a teleserye as being a 'bayani with magical powers.'"

"The writers and producers of this teleserye may have overlooked and neglected the cultural sensitivities of our Indigenous Peoples hence they owe us an explanation or clarification," he stated.

"It is not enough for writers and producers of movies and teleseryes to come up with concepts, titles, and characters that would sell and create blockbusters yet carry with them half-truths and lies that destroy and negate the real essence of an IP terminology, as in the case of 'Bagani', and instead bring injustice to the 14 million Filipino IPs."

While Adamat did not mention the exact meaning of "bagani" in the letter, the term is used by the Manobos to refer to "tribal warriors" who defend the community from outside threats.

Based on the show's trailers, "bagani" are depicted as heroes with supernatural powers.

The Armed Forces of the Philippines (AFP) has also been criticized for appropriating the term when it formed a paramilitary group called Magahat-Bagani. The group was pit against fellow lumad (indigenous peoples) who were thought to be linked to communist group New People's Army (NPA).

Datu Taday Campos, a Manobo chieftain in his 90s from Sitio Han-ayan in Diatagon village, Lianga, told Inquirer in 2015 that the concept of bagani was used to divide the lumad for outsiders to access resources.

READ: The 'bagani' of past and present

Even before its premiere, the TV show was hit with controversy when its trailer revealed mixed-race actors like Liza Soberano and Enrique Gil "brown-faced" to appear darker.

He also claimed that the show was not about precolonial Philippines, thus ancestral Filipinos were not being portrayed. "'Bagani' is set in a fictional world called Sansinukob," which is an alternate world, he said in a Twitter post.

As of this writing, ABS-CBN has yet to issue a public response to Adamat's letter. JB